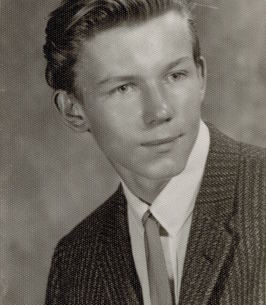 Memorial Candles Lit for Wilbert | SEE ALL
Light a Candle
"We are honored to provide this Book of Memories to the family."
— Erickson-Crowley-Peterson Funeral Home
Funeral Details Memory Wall Photos & Videos Send Flowers

Print
Wilbert “Hausi” Wainio, 70 a resident of Atlantic Mine passed away on Monday morning August 6, 2018 at the Omega House in Houghton.

He was born on January 21, 1949 in Hancock a son of the late Reino and Lillian (Jaasko) Wainio.

He graduated from Jeffers High School and later from Suomi College.

Wilbert enlisted in the U.S. Army in 1968 and served honorably for two years during the Vietnam War.

Locally he worked for Northern Hardwoods as a saw filer for 23 years retiring in 1991.

Preceding him in death were his parents and a brother Wayne.

A funeral will be held on Thursday August 9, 2018 at 7:00 PM in the Erickson Crowley Peterson Funeral Home in Calumet. Following the funeral service the Copper Country Veterans Association will hold military honors.

The Erickson Crowley Peterson Funeral Home in Calumet is assisting the family with the arrangements. Online condolences can be left for the at www.ericksoncrowleypeterson.com


Burial will be in the Atlantic Mine Cemetery.

To send flowers to the family of Wilbert Alan Wainio, please visit our Heartfelt Sympathies Store.

We encourage you to share any memorable photos or stories about Wilbert. All tributes placed on and purchased through this memorial website will remain on in perpetuity for future generations.

DM
Sorry for your loss,, May the Lord bring preace and confort to everyone,,
Debra McPherson - Wednesday August 08, 2018 via Condolence Message
Share This:

C
Thanks Peggy. I agree with you. Clyde and Donna love their brother(s) and their children. God's Peace to all of the family.
Cher - Wednesday August 08, 2018 via Condolence Message
Share This:

PM
It saddens me to see that his brother Clyde Wainio and his sister Donna LaForest weren't mentioned as survivors.
peggy manninen - Tuesday August 07, 2018 via Condolence Message
Share This:
1
Page 1 of 1
Share
×