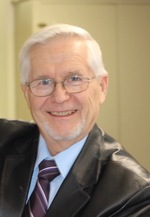 Rev Rodney A Johnson, 79, a resident of Otter Lake and currently residing at the Wellstead of Rogers and Diamond Crest Senior Living in Minnesota went home to be with his Lord and Savior on Sunday, May 10, 2020. He was born on May 28, 1940 to Enard and Ellen Johnson in Kingston, Minnesota. He spent most of his childhood in Kingston, except for a brief time in Minneapolis during the war. He graduated from Dassel High School and went on to St. Cloud State where he graduated with a double major in math and physics. He married his beloved Viola “Dolly” Barney in 1960. They spent their early years in Minnesota before moving to Lake Linden, Michigan and finally to the Otter Lake area. He taught high school math in Hermantown Minnesota, and then moved to Minneapolis and worked as a computer programmer at Univac and Midwest Systems. While there he worked on the Apollo project to put man on the moon. He was called into full time ministry at the Laurium Shining Light Church in 1972. He spent the next 40 years serving that congregation and other area churches, including two mission trips to India and one to the Philippines. During those years he was involved in many organizations: president of the Lake Linden-Hubbell school board, chairman of Stillwaters Assisted Living, Portage Health Hospital Board and hospice chaplain, Inter-Lutheran Seminary board where he also taught, and administrator of the Master’s Mission. He was also a “jack of all trades”. His pride and joy was designing and building his retirement home at Otter Lake. He also wrote a book called “Coming to Grips with Alzheimers” after his wife developed the disease. He was a loving pastor, husband of 57 years, father, grandfather and great-grandfather. His life’s mission was to serve the Lord by serving others. He was also recognized as a wise counselor, assisting countless people across the country. He was preceded in death by his wife Dolly, his parents, sister Shirley Falls, and brother Ray. Survived by daughters: Kari (Tim) Seaton of Hancock, Connie (John) Bramble of Calumet. Sons: Kirk (Amy) Johnson of Rogers, MN; Jeff (Lucinda) Johnson of Champlin, MN, Josh (Heather) Johnson of Plymouth, MN. Grandchildren: Tara (Corey) Packard, Brenna (Travis) Williams, Caitlin (Ryan) Tanner, Erica (Chris) Nelson, Derek (Reesa) Johnson, Tyler (Jodi) Johnson, Brenton (Marria) Johnson, Rachel (fiancé Trent Meseck) Johnson, Emma, Clara, Annabelle, Livia, and Luke Johnson. Great-grandchildren: Elijah, Jaden, Silas, Jovie, Kalen, Jase, Kyler, Alia, Riley, Allie, Charlotte, Cora, Phillip, Saelor, Atlas, Porter, Elsie, and Bennett. Numerous nieces, nephews, cousins, and friends. A private family burial will take place in May with a memorial service to be announced at a later date. The Erickson Crowley Peterson Funeral Home is assisting the family with the arrangements. Online condolences can be left at www.ericksoncrowleypeterson.com