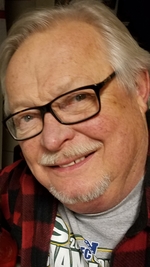 Arthur J Hill, 75, a resident of Mohawk passed away after a brief illness, on Saturday April 11, 2020 at UP Health System- Marquette.
He was born on February 1, 1945 in Skanee to John and Aino (Olkkonen) Hill.
He attended L’Anse and Berkley High Schools and graduated with the Class of 1963. After high school Arthur went to work for Ford Motor Company as a draftsman and later was an illustrator drawing futuristic cars. He was the co-inventor of the safety ignition lock and latch mechanism for 1975 model cars. He enlisted with the United States Army in 1966 and served in the Vietnam War as a Public Information Office Photographer and Battalion Artist & Draftsman. He was honorably discharged in 1969. After serving with the US Army, he moved to California and started work at TRW designing satellites and space ships. Years later he changed directions and went to Art Center College of Design to further develop his advertising career. After school he landed a job as Art Director at Ogilvy & Mather. At Ogilvy he worked on Mattel Toys and designed the Barbie campaigns for years, as well as Woodsy Owl. He worked in Los Angeles for a few years and then became a freelance Illustrator and Art Director. As an Art Director and Illustrator for over 20 years, he designed an attraction for Universal City Florida and was the main illustrator for Honda and Kawasaki Motorcycles. Art also spent a few years with Evans, Hardy & Young in Santa Barbara as a Creative Director, where he worked on Triumph Motorcycles and Idaho Potato Company.
For the last 10 years, Arthur was an art instructor at Finlandia University, which gave him immense joy.
Art loved motorcycles and shared his art with that community his whole life. He designed artwork for Abate of California & Oregon and also was one of the original group that started the Annual MDA Charity Motorcycle Event LOVE RIDE. He designed the artwork for the event for more than 15 years.
He enjoyed working on his motorcycles and antique cars. Designing, rebuilding and tinkering was what Arthur loved to spend his time doing. He adored being in the kitchen, collecting and perusing through recipe books, acquiring kitchen gadgets, and whipping up something delicious. He loved to travel, whether it be to a sunny beach or simply to Lambeau Field for a Green Bay Packers game.
He is preceded in death by his parents, John and Aino Hill, and his brothers, Karl Hill M.D., and John Hill.
He is survived by his beloved daughter, Becca (Travis) Marsh of Oregon, his grandson, Bodhi James Marsh who was born on April 12, 2020, his best friend and person, Valerie Butkovich, as well as numerous cousins, nieces, and nephews.

Per Art’s wishes, cremation has taken place and a celebration of life will be held at a later date.
Online condolences for the family may be left at www.ericksoncrowleypeterson.com
The Erickson Crowley Peterson Funeral Home in Calumet is assisting the family with the arrangements.