To share your memory on the wall of Virginia Massoglia, sign in using one of the following options:

Print
Virginia M. Massoglia, 92, originally from Laurium, Michigan, passed away on Thursday, April 9, 2020. She was a resident of Garden View Assisted Living in Calumet for the past 3 years.

Virginia was born on February 2, 1928 in Hancock, ... Read More
Virginia M. Massoglia, 92, originally from Laurium, Michigan, passed away on Thursday, April 9, 2020. She was a resident of Garden View Assisted Living in Calumet for the past 3 years.

Virginia was born on February 2, 1928 in Hancock, a daughter of the late John and Maria (Chiarvalli) Balconi. She attended Houghton schools, graduating Salutatorian of her class in 1946.

On September 12, 1953 she was united in marriage to Dominic DJ “Doc” Massoglia at St. Joseph Catholic Church in Hancock. He preceded her in death on July 17, 1987.

She was a charter member of the Newman Club, now known as St. Albert the Great, and a member of St. Paul the Apostle Catholic Church in Calumet.

Online condolences can be left for the family at ericksoncrowleypeterson.com.

A funeral mass will be held at a future date and burial will be in the Lake View Cemetery.
Read Less

To send flowers to the family or plant a tree in memory of Virginia M. Massoglia (Balconi), please visit our Heartfelt Sympathies Store.

We encourage you to share your most beloved memories of Virginia here, so that the family and other loved ones can always see it. You can upload cherished photographs, or share your favorite stories, and can even comment on those shared by others.

Posted Apr 26, 2020 at 01:56pm
Virginia was my mother's "best friend" for the past 6 months. My mother came to Gardenview in October and initially she found the new environment a challenge. But as soon as she and Virginia met, which did not take long, Virginia declared she was going to adopt my mother because she loved her so much. Virginia would cross her 2 fingers and say "we are this close".

Virginia brought love and friendship to Mom and to everyone she met. I discovered Virginia had many "adopted" children, people she cared for and loved. She was warm, friendly, intelligent, full of life. When I read Virginia's obituary, I was not surprised to read of her academic and professional successes. All this and raising a large family. She was truly an extraordinary lady. I am so grateful to have known her even for just a short time. My Mom certainly misses her dear friend, but with the acceptance of life that maybe comes with age, she says Virginia lived a good long life. Thank you to her loved ones, and Thank you Virginia. You made this be a wonderful life for others.
Comment Share
Share via:
MK

Posted Apr 17, 2020 at 07:20pm
I was so sorry to see she had passed. I don’t ever remember seeing her without a big smile on her face! She was a sweetheart.
Comment Share
Share via: 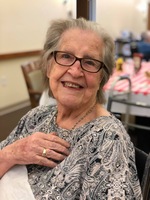