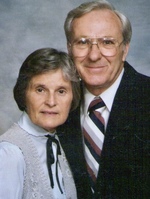 February 5, 2020 Calumet
Bonnie Rendel, 88, a resident at Gardenview in Calumet and former Calumet resident passed away peacefully with her husband by her side in the early morning hours on Wednesday February 5, 2020.
She was born on May 3, 1931 in Monroe, Michigan a daughter of the late Floyd J. and Frances A. (Kull) Yeary.
Bonnie graduated from Houghton High School and on August 22, 1948 she was united in marriage to Benjamin “Ben” Rendel, Jr.
Bonnie was an LPN nurse as well as a nutritionist. She worked in the nursing/medical field with Ben, directing patient care and culinary services. Together they operated Superior Health Haven in Munising in the late 1950’s and 1960’s, then in 1970, they opened Cypress Manor nursing home in Hancock, which they operated until selling the business and retiring in 1985.
Bonnie’s faith in God was one of her core values. She was a member of the Seventh-Day Adventist Church in Houghton. Other core values were her family, and nature, always welcoming wildlife that visited the patio of “The Farm” looking for handouts, which she made sure to supply.
Preceding her in death were her daughter Laura Jean, her parents, her brothers F. Maynard Yeary and Lon O. Yeary, and son-in-law Joseph D. Freed.
Bonnie is survived by her husband of 72 years Ben, sisters Karen Todd of Battle Creek, MI and Alice Yeary of Monroe, MI, daughter Diane (Gary) Russell of Allouez Twp., son Brian Rendel of Hancock, grandchildren Chad (Kelly) Russell, Kurt (Trish) Russell, Tara (Christian) Anderson and Bret (Jessica) Russell, great grandchildren Keira, Camille, Ellewyn, Keri, Brasher, William, and Autumn.
A graveside service will be held in the spring at Lake View Cemetery in Calumet. The Erickson Crowley Peterson Funeral Home in Calumet is assisting the family with the arrangements. Online condolences can be left for the family at ericksoncrowleypeterson.com