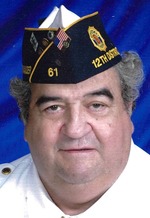 William,(aka. Butch), Paul Gariepy, 73
MILWAUKEE—William “Butch” Gariepy, 73 of Mohawk, passed away on November 25, 2019 after a long battle with pancreatic cancer. Butch lost the fight at the Clement J. Zablocki Veterans Affairs Center in Milwaukee where he was being treated. At his side were son Emmet and brother Bob.

He was born in Lake Linden and raised in Mohawk by his parents Lorraine and Jerome “Slim” Gariepy. It was here that he developed a lifelong passion for music and love for woodworking that would carry on throughout his life. He became a licensed journeyman carpenter working across the lower peninsula and eventually opening his own custom woodworking shop where he made many one-of-a-kind items out of bird’s eye maple.

With music being a driving force in his life, he played bass fiddle with the Humble Quackgrass Bluegrass and Passing Time Bands for many years. He also carved out his own bass instrument and several violins.

Additionally, he was a member of the American Legion - Lake Linden Post, former member of Mohawk and Calumet Posts serving as their Past Commander, and a past Upper Michigan 12th District Commander. During his affiliation, Butch was known to have prepared many special occasion meals for the Posts.

Butch was well known for his hobbies which were antique cars, woodworking, and music. He was a founding member of the Keweenaw Antique Car club and active for many years participating in parades and special event showings with his 1932 Chevy Coupe. He was also an honorary member of the Michigan Tech Alpha Kappa Psi Fraternity.

Butch had a generous heart for those that needed help and will be missed by family and friends.

A Funeral Mass will be held at 11:00 AM December 14, 2019 at Our Lady of Peace Catholic Church in Ahmeek. Visitation will ne held on Friday December 13, 2019 from 4:00 - 7:00pm at the Erickson Crowley Peterson Funeral Home. In lieu of flowers the family is asking for donations be directed to the Fisher House Charity Wisconsin, which supports veteran families during periods of hospitalization at the Milwaukee VA (fisherhousewi.org).