To share your memory on the wall of Ezra Haataja, sign in using one of the following options:

Ezra “Esh” Carl Haataja, 93 a resident of Mohawk and more recently the Bluffs and Omega House passed away on Saturday May 4, 2019.

Ezra “Esh” Carl Haataja, 93 a resident of Mohawk and more recently the Bluffs and Omega House passed away on Saturday May 4, 2019.

Ezra was born on June 3, 1925, the son of Henry and Elizabeth (Vayrynen) Haataja. He attended Calumet High School, graduating with the class of 1943. He married Marlene Nordstrom in July of 1953. Marlene preceded him in passing in July of 2012. Together they had three children: Ronald, Michael & David. Michael passed away on May 27, 2016.

He was an active member of Bethany Lutheran Church in Mohawk.

He was preceded in death by his parents, brothers and sisters.

He is survived by:

A memorial service will be held on Wednesday May 15, 2019 at 1:00 PM in the Bethany Lutheran Church in Mohawk with Pastor Tim Johnston to officiate.

Burial will be in the Calvary Cemetery in Ahmeek.

To send flowers to the family or plant a tree in memory of Ezra Carl Haataja, please visit our Heartfelt Sympathies Store.

We encourage you to share your most beloved memories of Ezra here, so that the family and other loved ones can always see it. You can upload cherished photographs, or share your favorite stories, and can even comment on those shared by others.

Posted Jun 04, 2019 at 11:42am
Our Sincere Sympathy to the Haataja Family. So sorry to hear of his passing, I just found out he passed away. Esh, is my 2cd cousin, and we were working on the family tree many years ago. My grandmother's maiden name was Haataja. He was telling stories of the family History, and wish I would have written some of it down..
God Blessings, Margo (Ranta) and Ron Rantanen
Comment Share
Share via:
MD

Posted May 15, 2019 at 01:27pm
Our hearts go out to the Haataja family during this sad time. Esh and Marlene “adopted” us during our time at Calumet Air Force Station many years ago. We stayed in touch all these years and have many fond memories of our visits to the U.P. Keeping you all in our prayers in the days ahead.

Posted May 12, 2019 at 02:38pm
Ron, Dave, and family. So sorry to hear of your Dad's passing. I'll always remember him as our scout leader and our march out to Mandan to camp. Our deepest condolences to you both.

Posted May 11, 2019 at 05:28pm
My sincerest sympathies to you both Ron and Dave for losing your wonderful Dad.
Years ago, when I lived in the UP and saw your Dad regularly, he always greeted me Cheerfully and was so kind! I will never forget him. He always told me how many miles he ran with a big smile!
Blessings to his memory...
With deep affection,
Ginny Bergh Lorencz
Comment Share
Share via:
GB

Posted May 10, 2019 at 02:25pm
To Ron, Dave and Family. Sorry to hear of your Dad's passing, but he's at home with your Mom now. I was the "paper boy" and neighbor some 60 years ago. My wife and I were able to visit your Dad when we were there in August 2014. Your parents were great people and neighbors and are missed. Gerald (Jerry) Bammert
Comment Share
Share via: 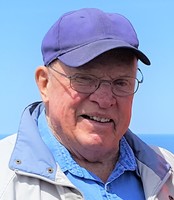