To share your memory on the wall of Paul Grabig, sign in using one of the following options:

He was born on September 9, 1936, the first-born son of George and Helen (O’Brien) Grabig of Houghton.

After graduating from Houghton High School in 1954, he enrolled and honorably served in the United States Navy for two years.

He made a career at Michigan Bell as a switch technician, retiring in 1995 after 38 years.

On June 27, 1959, Paul was united in marriage to June Berryman. In 2009 they celebrated 50 happy years together with family.

Paul loved hunting, fishing, cross-country skiing, boating, woodworking, and water skiing in his spare time. His summer months spent at their family camp on Rice Lake were those he cherished most. He was a gadget and computer guy, learning new technologies well into his golden years. Paul was an active member of the Laurium United Methodist Church, the Men’s Brotherhood, and Telephone Pioneers of America.

Preceding him in death was his father, mother, and brother Phillip.

Funeral services will be held on Monday April 29, 2019 at 11:00 AM in the Erickson Crowley Peterson Funeral Home in Calumet with Pastor Jay Weidner and Pastor Gunsoo Jung to officiate.

Friends may call at the Erickson Crowley Peterson Funeral Home in Calumet on Sunday from 3-6 PM and one hour prior to the funeral on Monday.

In lieu of flowers, donations may be made to the Copper Country Humane Society and/or to the local hospice.

Burial will be in the Lake View Cemetery in Calumet.

To send flowers to the family or plant a tree in memory of Paul George Grabig, please visit our Heartfelt Sympathies Store.

We encourage you to share your most beloved memories of Paul here, so that the family and other loved ones can always see it. You can upload cherished photographs, or share your favorite stories, and can even comment on those shared by others.

Laura & Dan L'Huillier, Fleury, Singler & Co., P.C., and other have sent flowers to the family of Paul George Grabig.
Show you care by sending flowers

Posted Apr 29, 2019 at 03:42pm
Dear June (Mickey) ,
You and your family are in our thoughts and prayers. You and Paul are special people to us, we have a heavy heart over the loss of Paul, a wonderful man.
Our love to you.
Julie and Dave Sprenger
Comment Share
Share via:
JC

Vivid Recollections was purchased for the family of Paul Grabig. Send Flowers

Posted Apr 26, 2019 at 05:14pm
June & family,
I would like to send my deepest sympathy to you and the family. I have such great memories of him and the family, many good times and laughs. Paul was one of a kind. He always had a smile on his face, and always great words to say about everyone. I know that he will be sadly missed, but you now all have a new angel watching over all of you. I send of my love and wish I could be there to hug you all in person. Please know that I will be keeping you all in my thoughts and prayers.
Dawn (Dee Dee) McCormick (Lander)
Comment Share
Share via:
LL

Posted Apr 26, 2019 at 12:42pm
I am so sorry for your loss. Of the few times I was able to visit with Paul at Rice Lake, he was always such a warm and accommodating person. I wish you June, and family, the tender mercies of Christ as you go through this difficult time. Laura L'Huillier, Mountain Home, ID
Comment Share
Share via: 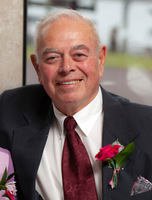