To share your memory on the wall of Dolores Bastian, sign in using one of the following options:

Provide comfort for the family of Dolores Bastian with a meaningful gesture of sympathy.

Dolores Bastian 92, a resident of Calumet and currently residing at PortagePointe passed away peacefully on Saturday morning March 2, 2019

Dolores Bastian 92, a resident of Calumet and currently residing at PortagePointe passed away peacefully on Saturday morning March 2, 2019

She was born on September 12, 1926 in Hubbell a daughter of late Wilfred and Veronica (Perrault) Poisson.

Dolores graduated from Lake Linden Hubbell High School with the class of 1944.

Following graduation, Dolores worked at the Copper Country Cheese Co-op in Dollar Bay and at Gartners in Hancock.

In 1968 she moved with her family to Redford where they resided for 20 years only to return to Calumet to retire.

Dolores was a very talented seamstress. She also loved to knit and crochet. She was still crocheting afghans for her great grandchildren a year ago.

The family wishes to thank Garden View Assisted Living and PortagePointe for the excellent care she was given.

Visitation will be held on Friday March 8, 2019 at the Erickson Crowley Peterson Funeral Home in Calumet from 5-7 PM.

A memorial Mass will be held on Saturday March 9, 2019 at 12:00 in the Sacred Heart Church with Fr. Gracious Pulimoottil to officiate and assisted by Deacon Art Stancher

Burial will be in the Lake View Cemetery.

Online condolences can be left for the family at www.ericksoncrowleypeterson.com

To send flowers to the family or plant a tree in memory of Dolores Bastian, please visit our Heartfelt Sympathies Store.

We encourage you to share your most beloved memories of Dolores here, so that the family and other loved ones can always see it. You can upload cherished photographs, or share your favorite stories, and can even comment on those shared by others.

Love, Dionne and Jason sent flowers to the family of Dolores Bastian.
Show you care by sending flowers

Posted Mar 07, 2019 at 03:58pm
My deepest sympathies for your loss, even a long life we’ll doesn’t seem long enough does it. I pray you find comfort in the words at Rev21:3,4 where Jehovah tells us that soon he will “wipe out every tear from our eye and death will be no more neither will mourning nor outcry nor pain be anymore.” Because there is no death in heaven we can be sure this is a promise for us her on earth. We can also look forward to the promise at Acts 24:15 “there is going to be a resurrection.” We will see our loved ones again.
Comment Share
Share via:
LJ

Posted Mar 05, 2019 at 05:43pm
Wishing you peace to bring comfort, courage to face the days ahead and loving memories to forever hold in your hearts.

Posted Mar 05, 2019 at 01:12pm
Sending love and prayers to all my cousins, Auntie Bernie, and Auntie Toni during this time of loss of your mom/sister. I will always remember Uncle Jack and Aunt Dodo and all the fun times we had when you all came up to visit. I am also praying that you have safe travels to and from the UP.
Love,
Denise Poisson Cormier
Comment Share
Share via:
LR

I am sorry to hear of the loss of your mother. She is now with her beloved husband resting after raising such a large and successful and close family.

My sympathies to you all at this time. What a long and fulfilled life your mother did get to live, which is comforting surely at this time of sorrow. 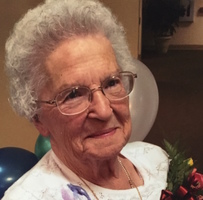