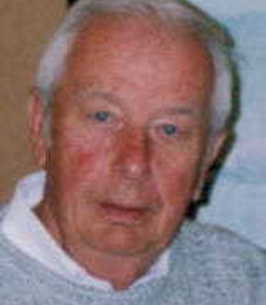 Memorial Candles Lit for Robert | SEE ALL
Light a Candle
"We are honored to provide this Book of Memories to the family."
— Erickson-Crowley-Peterson Funeral Home
Funeral Details Memory Wall Photos & Videos Send Flowers

Print
Robert J. Outinen, 83, a resident of Allouez, passed away peacefully with his family by his side on Thursday, October 25, 2018 at the Houghton County Medical Care Facility in Hancock.
He was born on May 19, 1935, in Calumet, to John and Mildred (Johnson) Outinen.
He attended Calumet High School and graduated with the Class of 1954.
After high school, Robert moved to Detroit, while there he worked for 10 years at Burroughs, and 20 years at Formatics. After retiring from Formatics, he began working for CLK Schools. He retired from CLK Schools in 2000.
On October 15, 1955 he was united in marriage to Grace Myntti in Laurium.
Bob enjoyed golfing, gardening, skiing and dancing. He also loved to watch the Calumet Copper Kings football and hockey teams. In his retirement years Bob and Grace enjoyed traveling with Joe and Lenore Enrietti.
He is preceded in death by his parents, John and Mildred Outinen, infant brother Raymond and his granddaughter, Jill Outinen.
Robert was a member of St. Paul’s Lutheran Church in Laurium, and the Keweenaw Lions Club for 40 years.
He is survived by:
His wife of 63 years: Grace
His sons: Stephen (Sherry) Outinen of Ahmeek
Mark (Mary) Outinen of Kalamazoo, MI
His grandchildren: Kevin (Kim) Outinen of Midland, MI
Joe Outinen at Michigan Tech
Tom Outinen of Kalamazoo
2 Great Grandchildren: Callie & Aiden Outinen of Midland, MI
Brother: Paul (Shirley) Outinen of Tamarack City

To send flowers to the family of Robert J. Outinen, please visit our Heartfelt Sympathies Store.

We encourage you to share any memorable photos or stories about Robert. All tributes placed on and purchased through this memorial website will remain on in perpetuity for future generations.

TS
We are thinking of all of you during this difficult time. Our thoughts and prayers are with you.
Tom and Ann Salamun - Saturday October 27, 2018 via Condolence Message
Share This:

Remembering all the good times. Picnics and baseball games at Fort Wilkins. Bonfires on the beach in Eagle River. Uncle Bob was always there. Many fond memories.
Joanne, Linda, John and Families - Friday October 26, 2018 via Heartfelt Sympathies | Order flowers in memory of Robert
Share This:

Our deepest condolences to Bob's family. It's been a long time since any of us saw Bob, but we've thought of him often. He was a good man. Much love to all of you.
Aunt Peggy and family - Friday October 26, 2018 via Heartfelt Sympathies | Order flowers in memory of Robert
Share This:

BB
im so sorry to hear of BObs passing,i miss him and grace taking their walks.god bless
bonnie bell baker - Friday October 26, 2018 via Condolence Message
Share This:
1
Page 1 of 1
Share
×