In Memory of
Chester Clare
Finch
1920 - 2017
Click above to light a memorial candle. 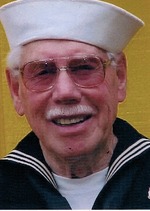 Chester C. Finch, a former resident of Eagle Harbor Township passed away on 15 May, 2017 at the age of 96.
Chet, a former teacher at Calumet High School was married to Rita Finch for more than 60 years. Rita passed on in March of 2005.
He was born in Alden Michigan October 7, 1920 the third son and youngest of eight to Chet and Clara (Ance) Finch and graduated from the Alden school in 1938. He lived through the great depression while losing both parents at a young age.
A veteran of the United States Navy serving from 1942 until wars end and discharge in 1945 seeing action throughout the south pacific aboard the destroyer USS Kidd.
Mr. Finch married Rita Barbara Downer on January 8, 1945 in San Francisco, California with a second ceremony on January 17, 1946 in Grand Rapids Michigan.
Chet is survived by his two sons, Joe and Allayne Finch of Eagle Harbor Township and Tim and Carol Finch of East Jordan, Michigan along with numerous grandchildren and great grandchildren.
He was preceded in death by his mother, father and sisters: Georgia Sikkinga, Rosamond Debore, Irene Coy, Leona Shirley and Florence Finch.
Brothers: Ganzel Finch and Francis Finch
Visitation will be held on Thursday May 18, 2017 from 6-8 PM at the Erickson Crowley Peterson Funeral Home in Calumet.
A funeral mass will be held on Friday May 19, 2017 at 11:00 AM in St. Paul the Apostle Church in Calumet with Fr. Abraham Mupparathara to officiate and Deacon Art Stancher to assist. Following the funeral mass the Copper Country Veterans Association will hold military honors outside of the church.
The Erickson Crowley Peterson Funeral Home in Calumet is assisting the family with the arrangements. Online condolences can be left for the family at www.ericksoncrowleypeterson.com

To send flowers to the family of Chester Clare Finch, please visit our Heartfelt Sympathies Store.